A friend suggested that we got together to make a “Cosy for Christmas” – which is a sort of dressing gown made from knitted squares.  I think we only started in November and as we needed either 79 or 112 squares we started knitting hard.  It soon became apparent that we wouldn’t be able to get it done for Christmas, so relaxed and took things at our own pace.  When we had got quite a lot of the squares, I started to sew them together and my friend continued knitting…….

It was after Easter before we finished all 112 squares, plus an extra as a pocket.  I then finished sewing it up and did a crochet border.

My friend models the “Cosy” 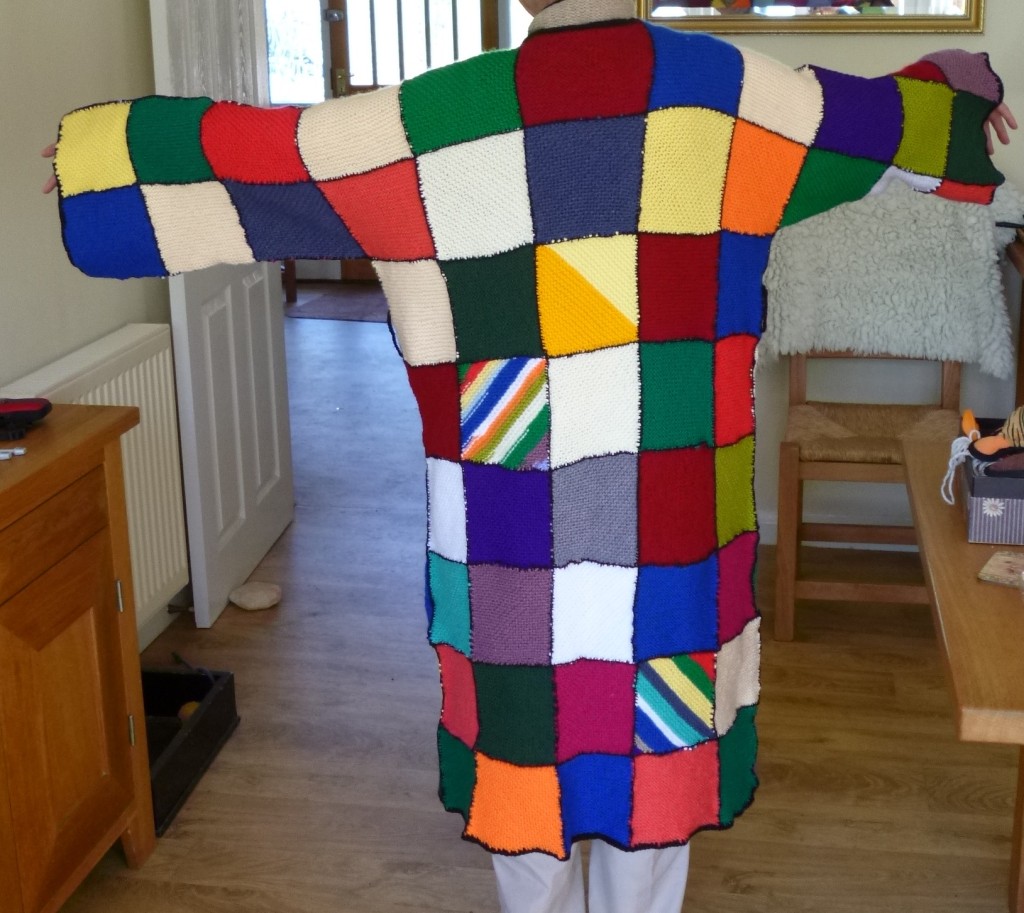 It was then ready to send off to the organisation that suggested it.

I then got a polite request from my three year old great-niece for a T-shirt for Charlie – or even better, 2 T-shirts – one in blue and one in red!  Charlie is a doll, who was female and had a pink dress, but it turns out that he is male, so the dress has gone to Millie (I think) and Charlie has no clothes.

I made the blue one – well it was actually a jumper from a pattern I had for dolls clothes and was also really for a female doll – but don’t tell Charlie (or Sofia).  I sent it off to make sure that it fitted – which I am told it did – before making the red one. 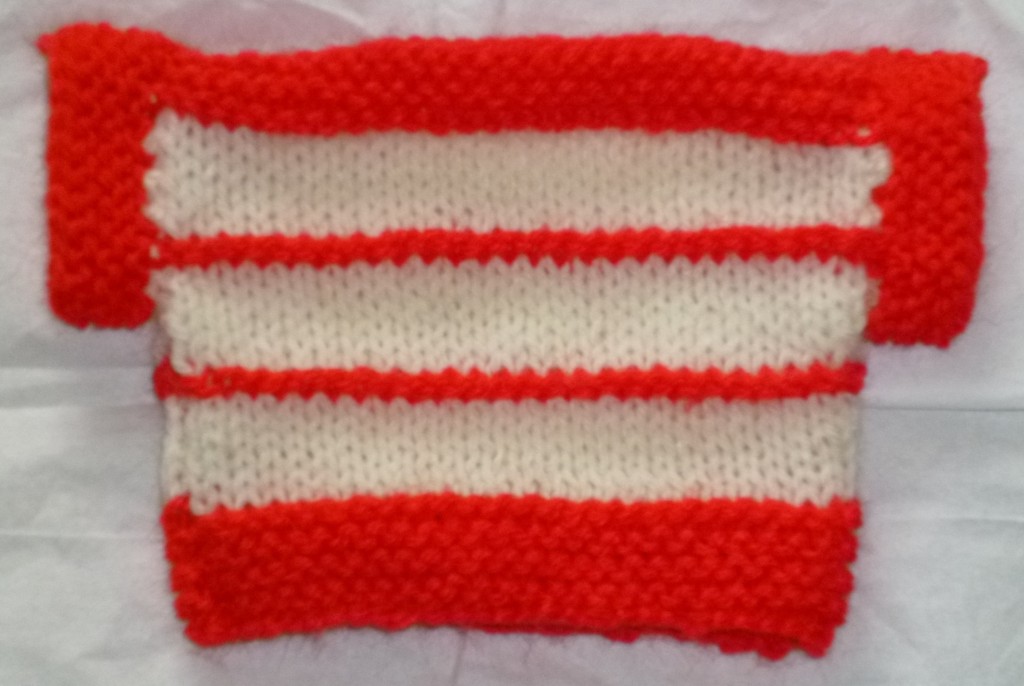 I then also attempted a pair of shorts, for which I had no pattern so it was all guess work.  I got onto the mark 3 version before I thought they might be O.K.

Although I have been given all the relevant measurements it is another question as to whether they will actually fit.  That will have to wait until they are tried on the doll. 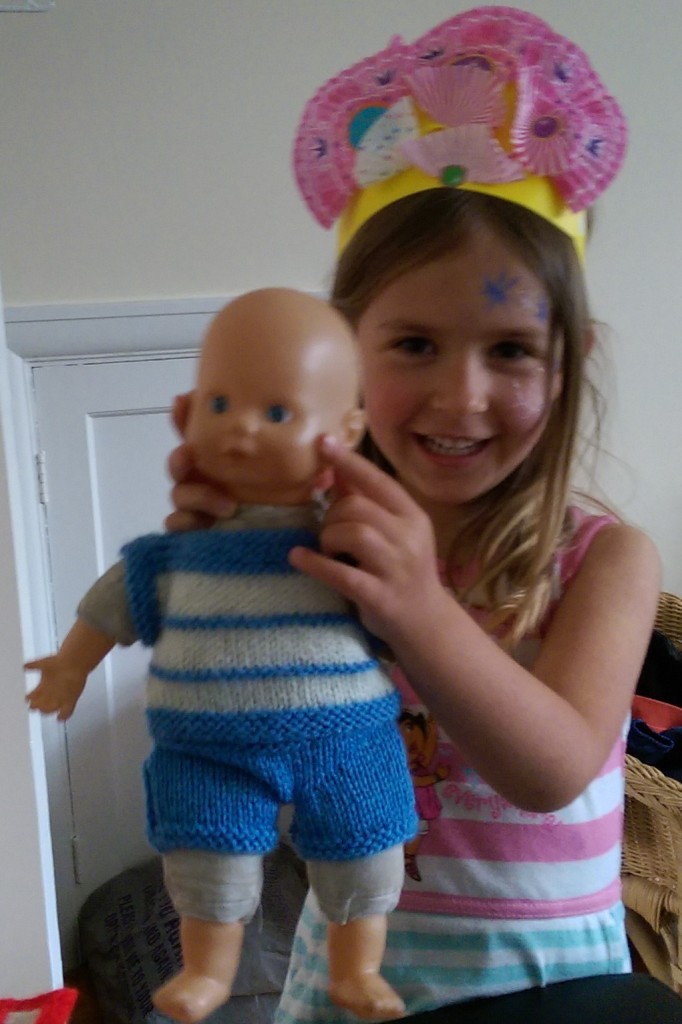 They seem to fit!

In addition to this there is a project locally, mostly from our church I think, to knit blankets for Syrian refugees, so people are knitting squares.  We have been given the sizes and the number of stitches and rows, but if my trials are anything like that of other people they will come out a mixture of sizes.  I offered to sew up (some) of them and was almost immediately given a bag of squares that someone’s mother had made.  They don’t match the sizes given and are not of uniform size, so I have worked to patch them together to make a blanket of the appropriate size – which has included knitting some extra bits, most of which are not squares but strips of various sizes.  We were asked to use bright colours and the squares I was given are a bit dull so I have used bright green for sewing up and my extra bits are mostly bright colours.  I had to do a crochet boarder too, to make the size roughly correct and that is bright red as there was not enough of the green. 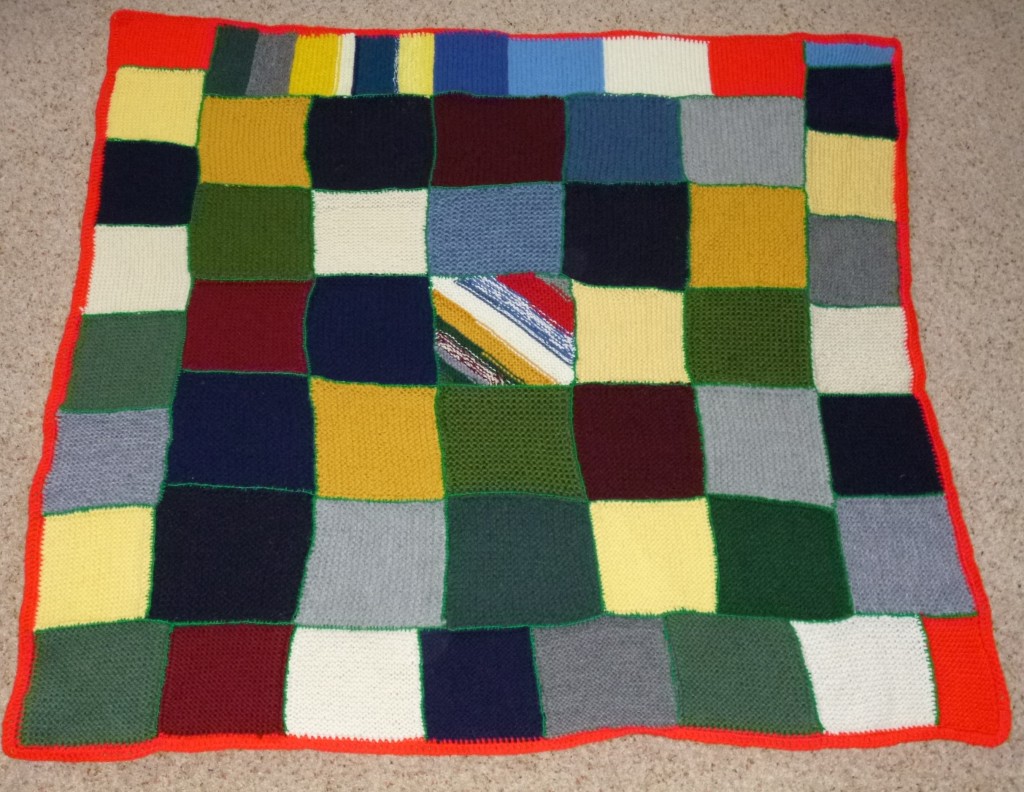 Guess which bits I added!

Now I am knitting squares while I wait to be given others to sew together and red shorts to go with the red T-shirt for Charlie.

Do I like knitting?  Well, completing something is quite satisfying and it gives me something to do with my hands when I am listening to the radio.