Go on (part of) another university reunion.

This year the reunion was at a hotel in Birdlip – the highest point of the Cotswolds, I believe.  I only went for part of it as it was quite close – only about 1½ to 2 hours drive away – depending on how many tractors and horse boxes one gets behind.

Most people went on the Friday (except the couple with a ticket for World Cup Rugby on the Friday evening) and went out for the day on Saturday.  I left mid-morning on the Saturday and went to have lunch and a catch-up and play, with my niece and family.  I am not very good at football! 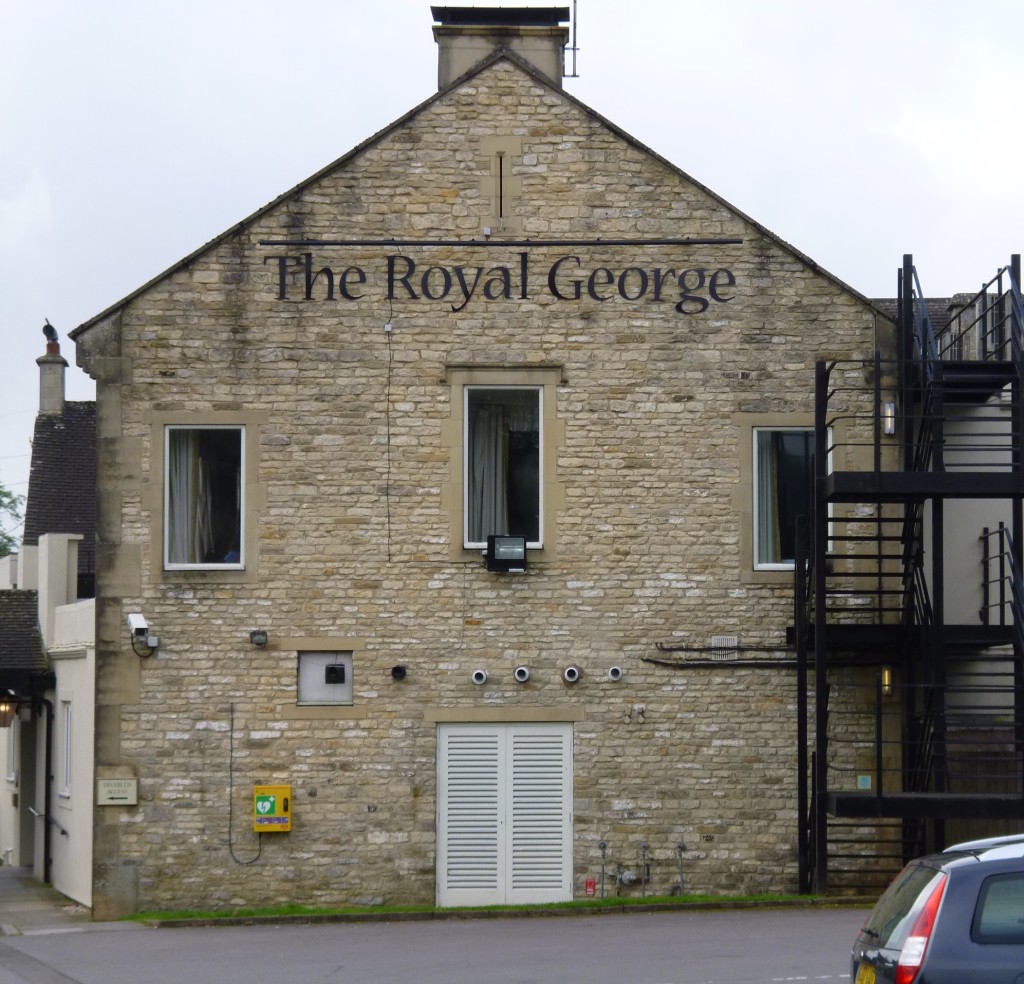 …..at about 4.00 – tea time!  I was just booking in when the 2 men who hadn’t brought their wives turned up, so the message I had been left, about where people were, became irrelevant.  I gathered that most people had been to Sudeley Castle – and learned more than they ever needed to know about Katherine Parr.  The couple who had been on an alternative trip on the steam railway then arrived.  They went because there was a special Thomas the Tank Engine day, which they (or Ken anyway) couldn’t resist.  Did sound more interesting than the Castle!

Having booked in, I went and found my room and unpacked some things that needed hanging up and then went down in search of a cup of tea – and guess what? – lots of the others were just doing the same.  Thanks to Sue’s competence, we managed to get pots of tea instead of just a cup and took them out into the garden as the weather was warm and sunny. 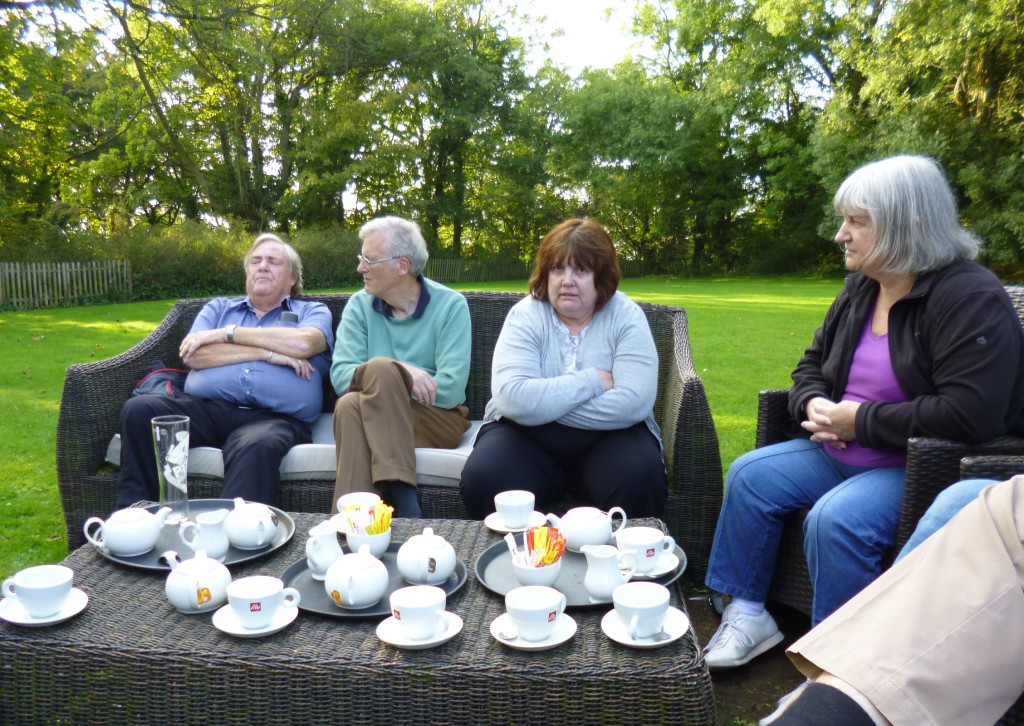 Tea in the garden.

Some of the others came to join us……

……and we grabbed more chairs.  There was, naturally, lots of chat. 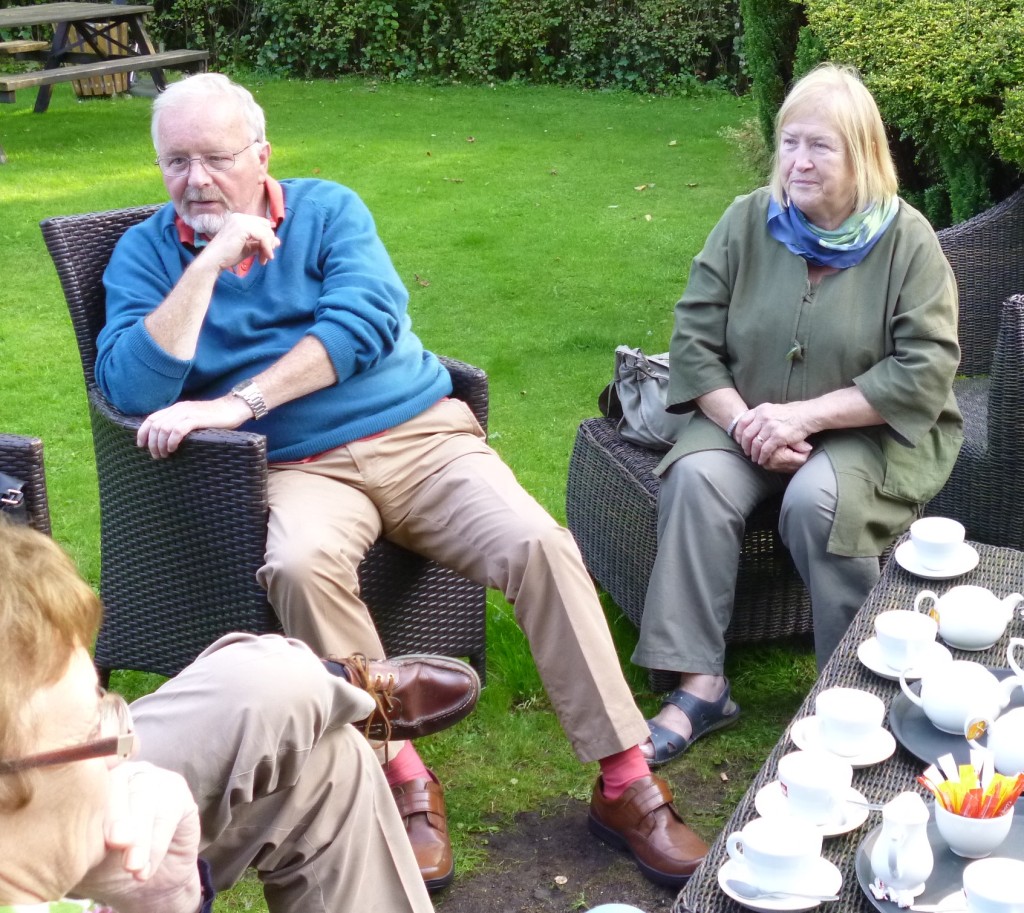 Plenty to hear about.

We stayed out until it began to get a bit chilly – it was September after all.  Time to go to our rooms and get ready for dinner, after arranging a time to meet for drinks.

When we got down Japan were beating South Africa in the rugby, so we had a change from talking about soccer!  After drinks we went to the table that had been set for us for dinner.  I wonder why they always put us at the end of a room? 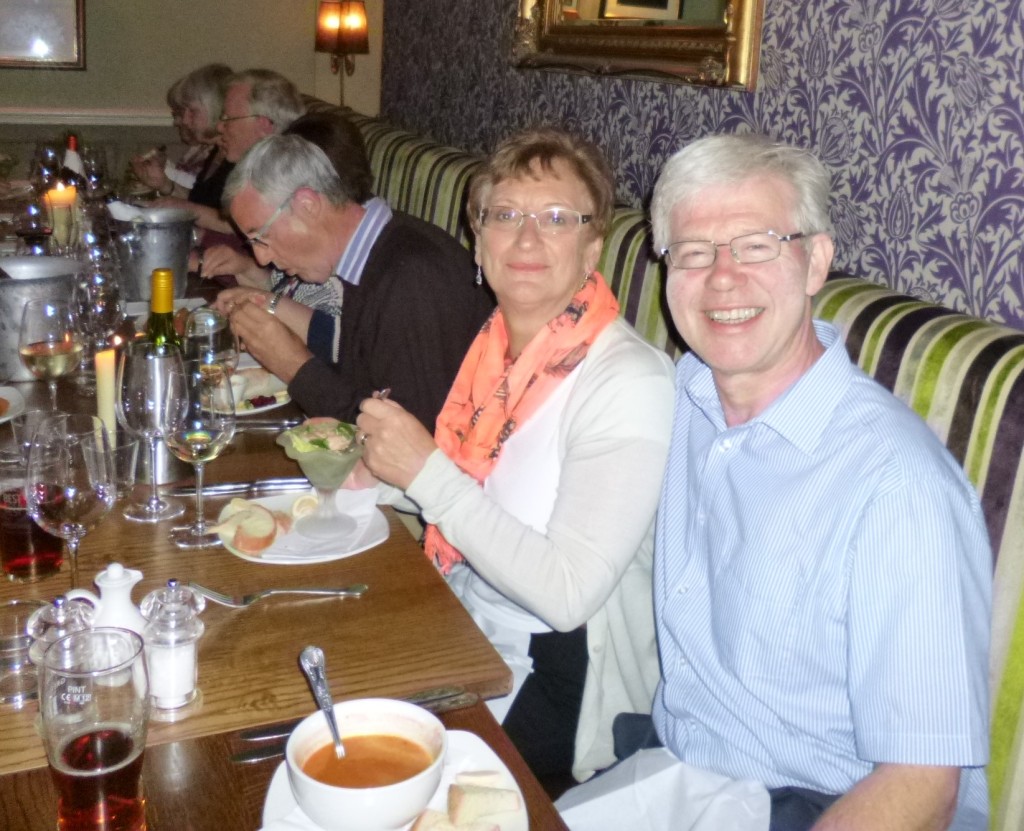 Table at the end of the room for dinner.

Chat continued throughout, of course…… 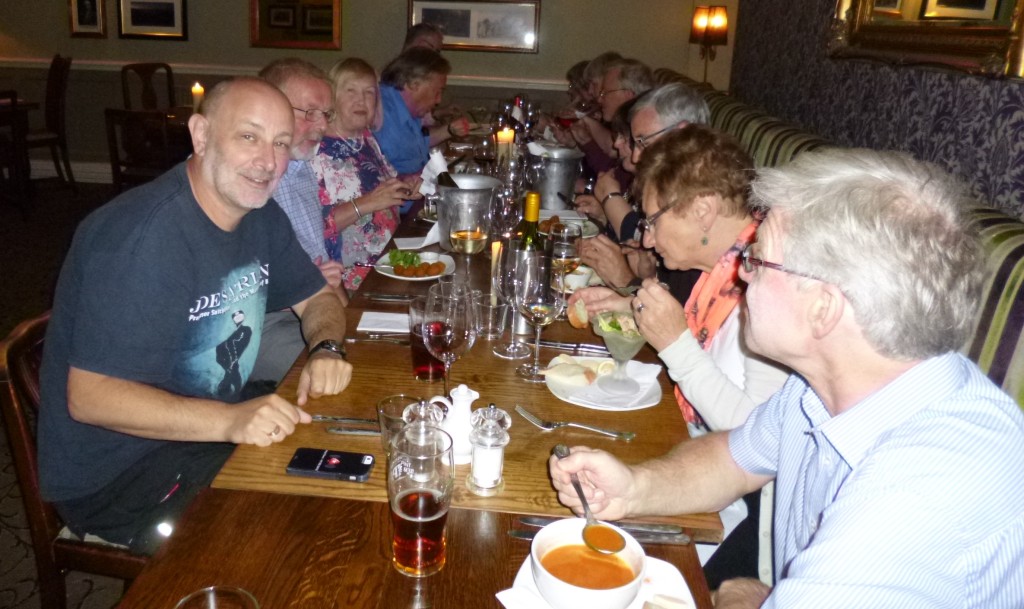 …..but there was some complaint at the start that we didn’t manage to go alternately male /female. 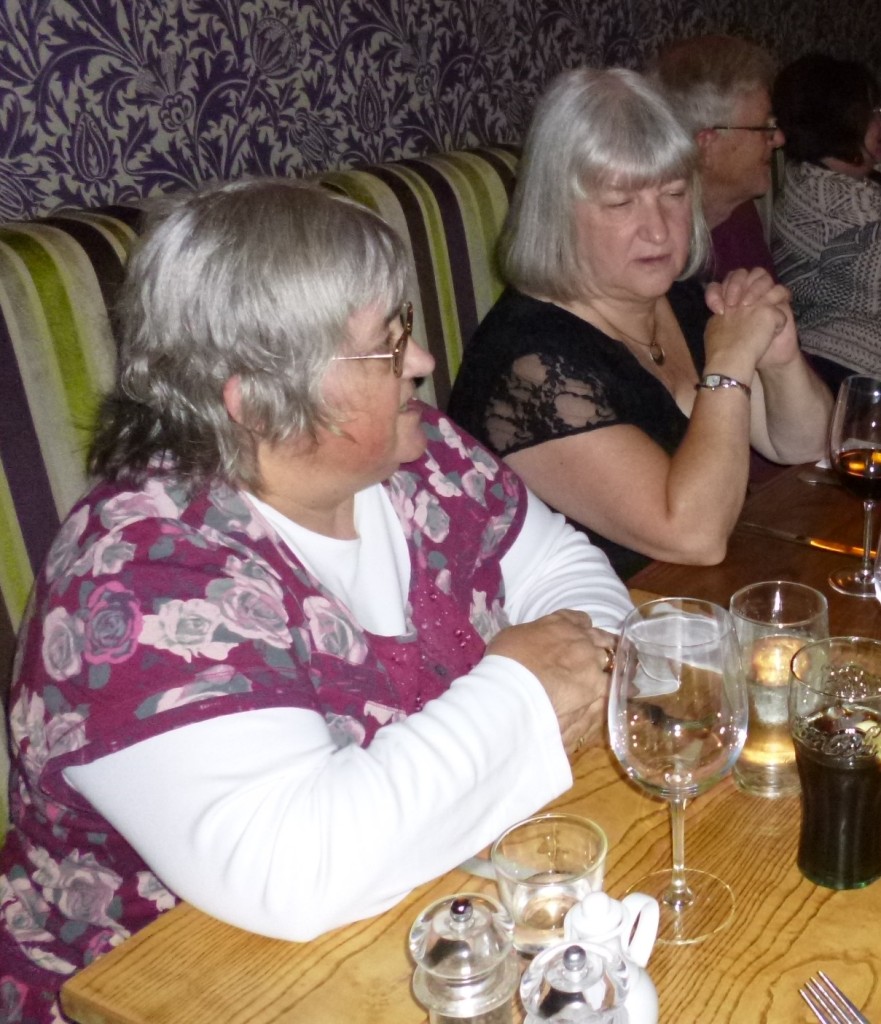 Failure in the seating

Can’t see that it mattered so long as we had a seat, food and our usual good company. 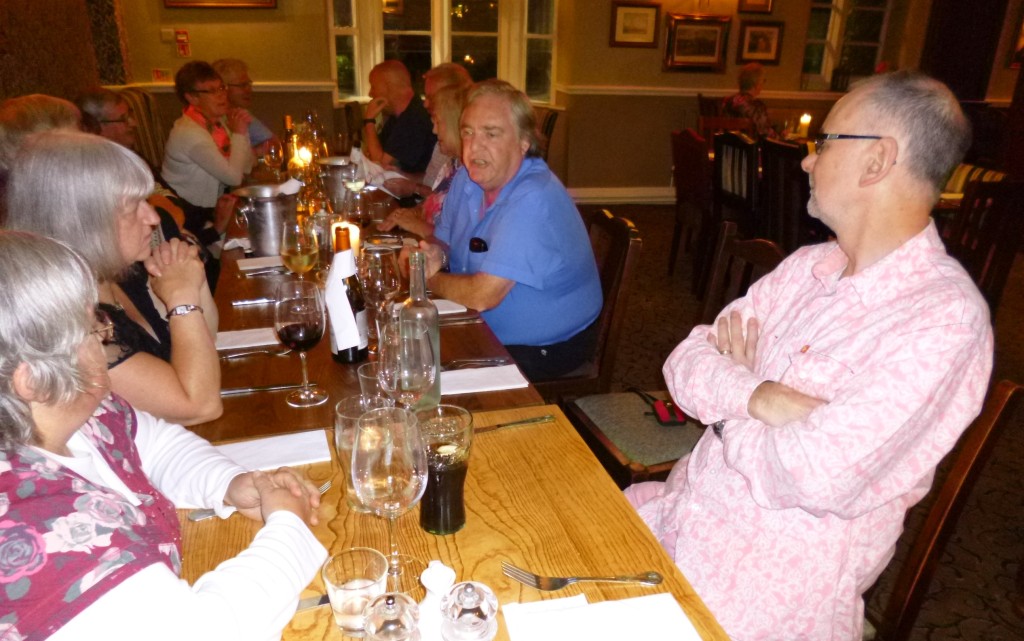 The gap was my place!

We had coffee and tea at the table and that was when Hugh was “practising his Czech” (was that the right language?) – or was he chatting up the waitress?  When they were very obviously trying to clear us away, we went.

The next day most of us got up for breakfast and guess what – there was more conversation.  So what did we talk about?  Well lots of stuff but the things that seemed to get repeated over the weekend were:  Radio 4 – especially the Archers; road kill; garden pests – seems badgers might be the most destructive; politics – good range of opinions there!

Then time to finish packing and check out and as most people were going to Gloucester for a guided tour, they met in the entrance hall. 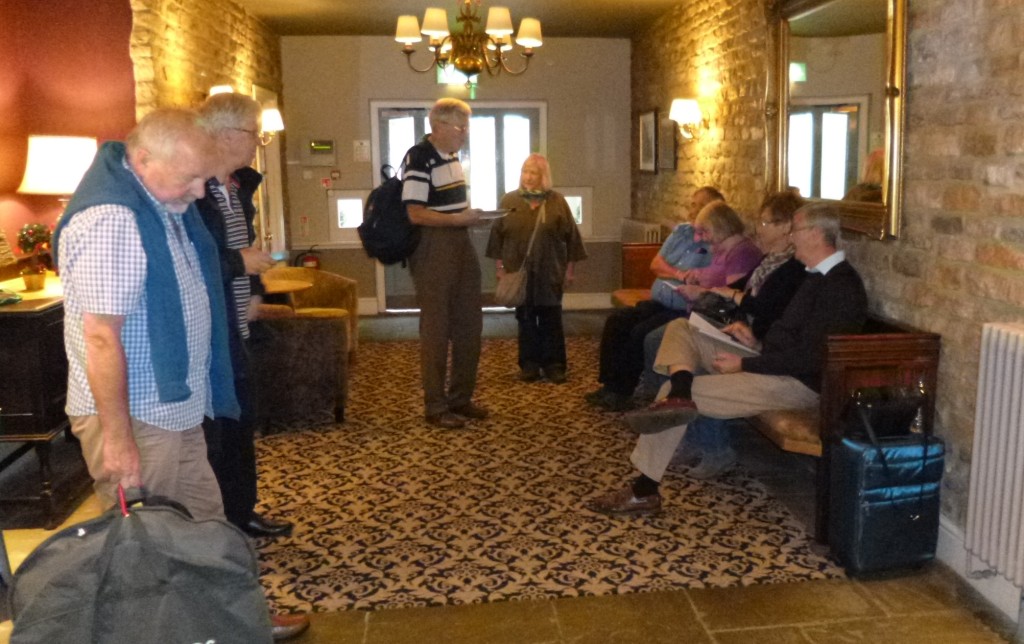 Waiting to go to Gloucester.

But there is always one….. 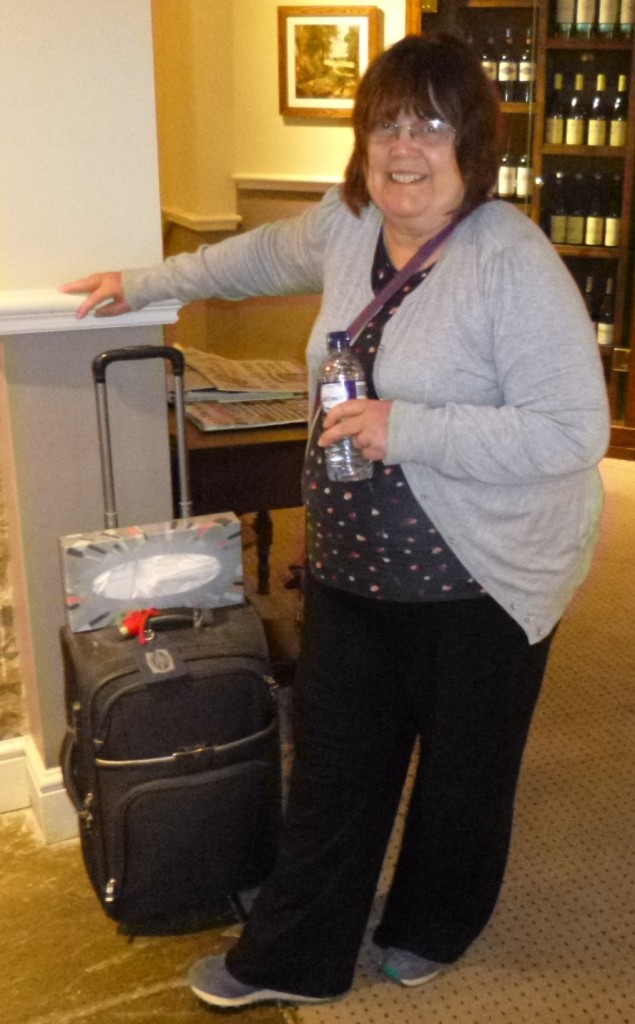 …..who won’t join the others for a photo!

Having waved them off, I went for a walk…… 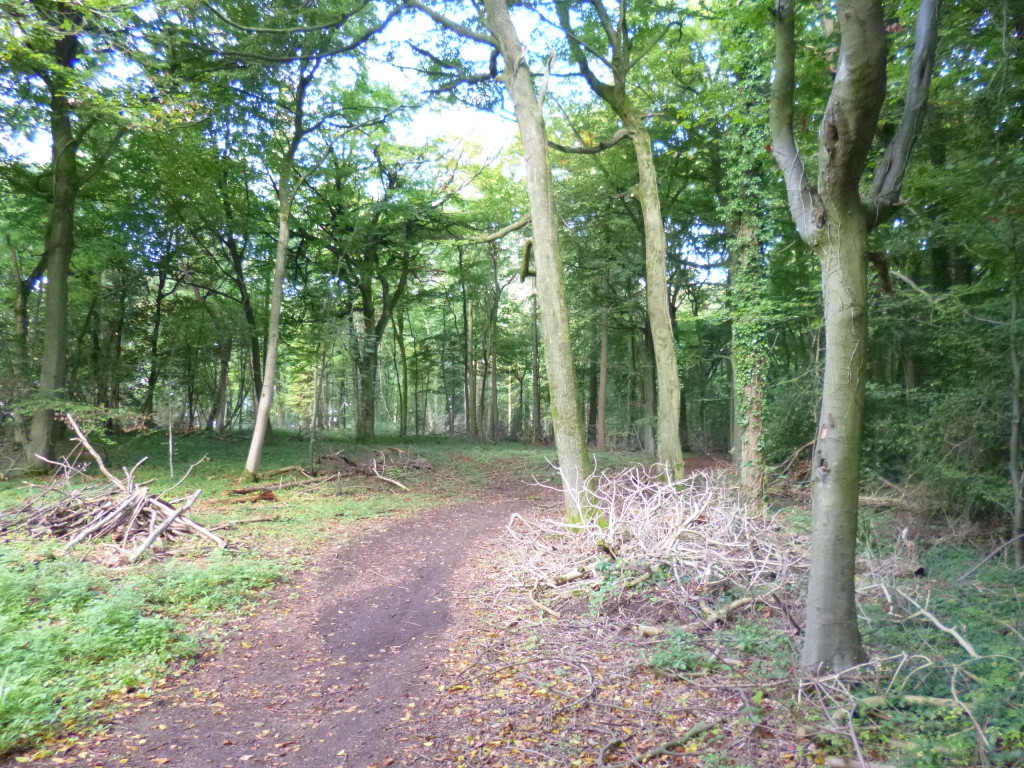 ….attached to the hotel grounds.  It was very pleasant and there were quite a few dogs to say hello to.  Reaching the end of the wood there was a good…… 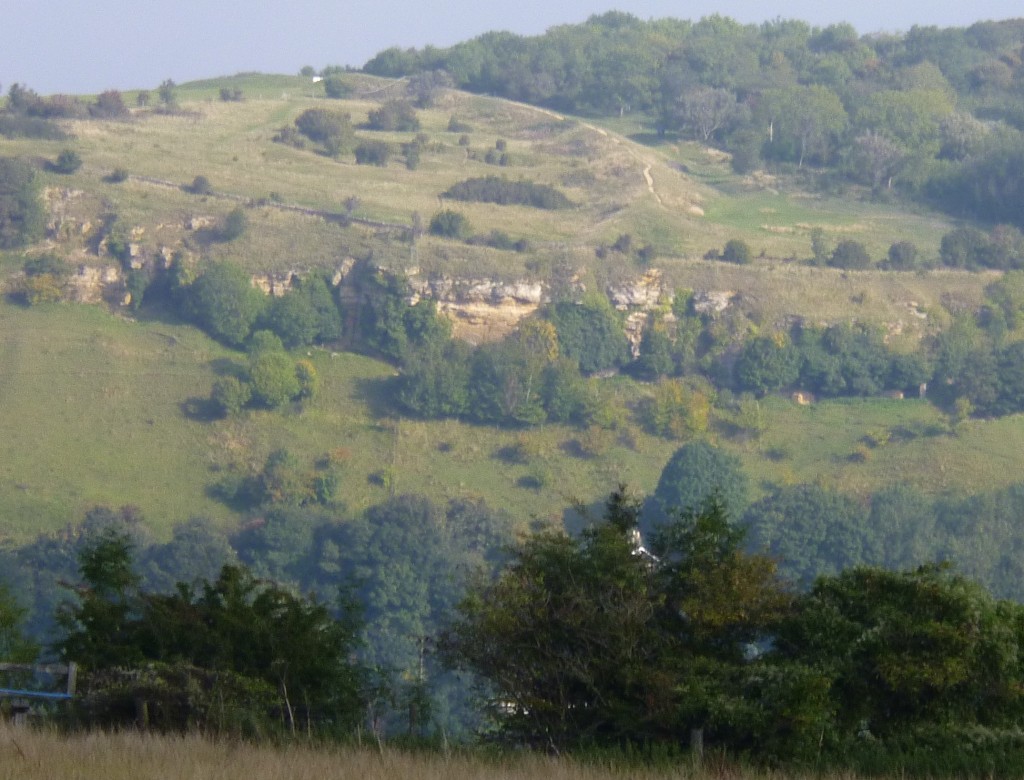 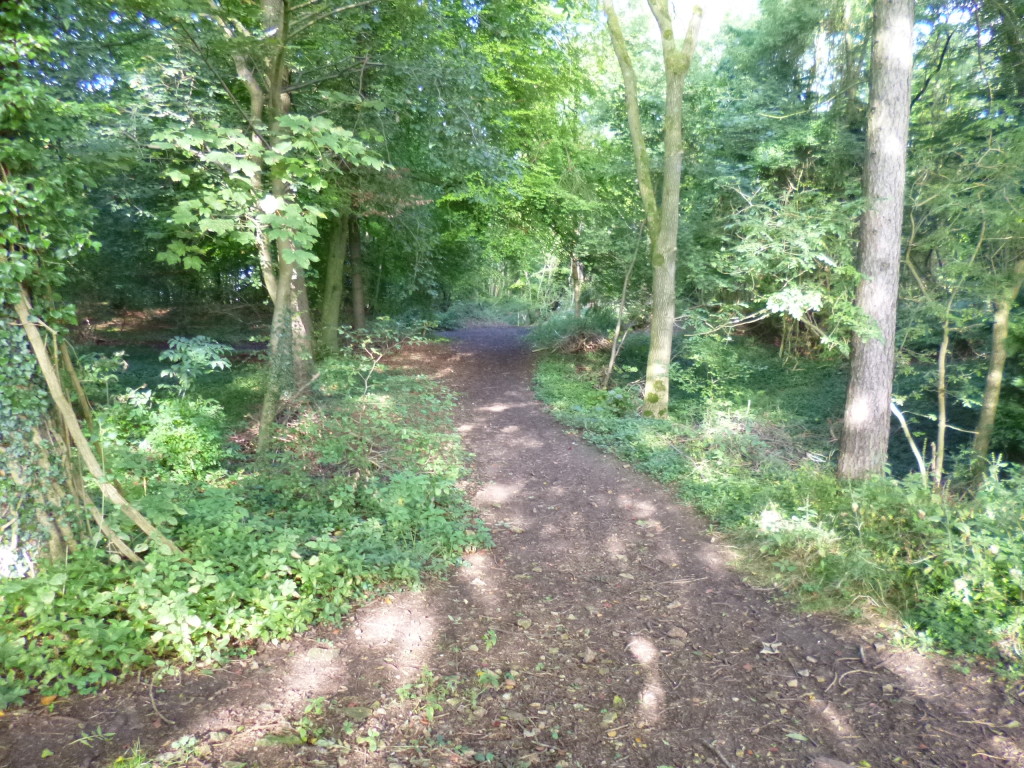 So was it a good weekend?  Yes.   It was great to see everyone, but not really enough time to catch up with how and where everyone was.  But then it is always better to be left wanting more rather than have too much!  Thanks to Heather and Brian for the organisation.