Walking and Sightseeing – St Ives I

Another hf holiday, but it didn’t start that well as I had booked a 1st Class train ticket by “advanced purchase” and I had to change at Westbury.  When I got to Westbury I found that the train I was supposed to get was cancelled!  Eventually found a nice man who worked out that I could just catch the train an hour later and it all worked – but an hour after it should have.  As it was 1st class, the lack of a reserved seat didn’t matter, but of course there was no taxi to meet me at the station, even though I had phoned to say what had happened.  Eventually I got a taxi, but by then there was no-one to greet us (someone else was in the same position) so we had to go on a hunt for someone to show us to our rooms.  And, of course we had missed the cream tea and the initial tour of the town.

My room was VERY small, with the basin and shower in the room and a bit cut off for the loo, but I knew that when I booked it and got a reduction – which more than paid for my first class rail fare!  I was told it was noisy, but in fact it wasn’t AND it had a sea view!  OK, that was over a flat roof, but still a sea view. 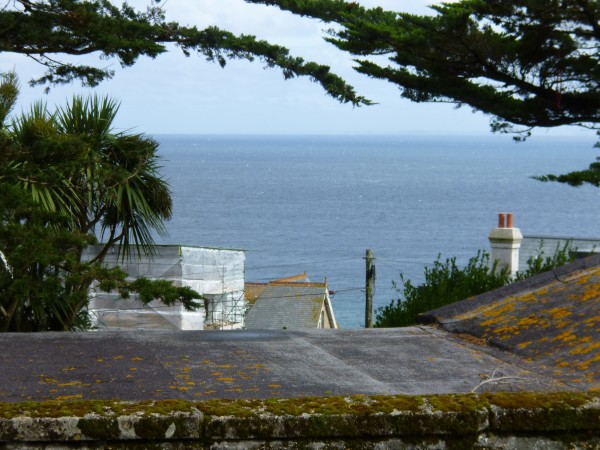 View from the bedroom

On the briefing before dinner we were told about the trip the next day and that we could go up the lighthouse at the Lizard, but imagining a tall thin lighthouse (I am no good with heights) I said I would leave that bit out.  Dinner was good, but I didn’t sleep that well – strange bed!

Up the next day and breakfast and coach to the Lizard car park.  We then walked from there along paths to the lighthouse. 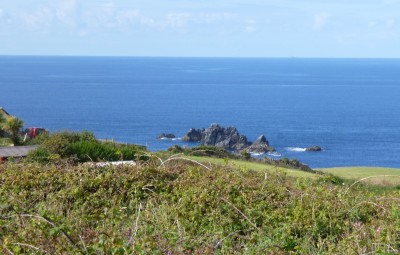 When we got to the lighthouse I found that it was not very tall and would have been OK but it was too late to change my mind. 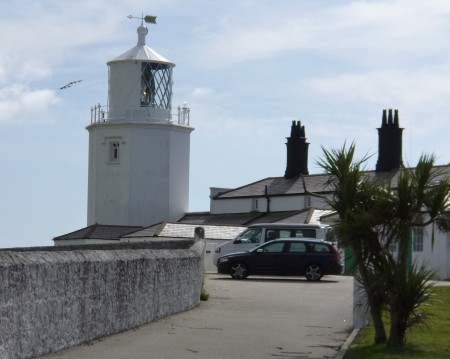 There was the Heritage Centre to look at though. 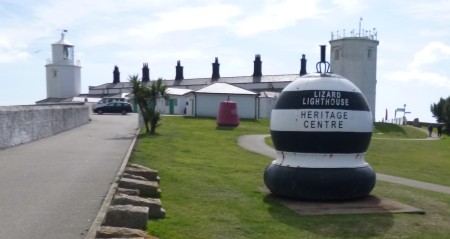 Entrance to lighthouse and heritage centre

That was interesting with a lot of information about the history of the lighthouses and Trinity House, including what it was like to be on the Eddystone Rock lighthouse, a broken thick steel door from there (shows the power of the storm…), information about what it was like on other places and for the wives left behind and some of the machinery that was used.  I was sorry to miss the actual lighthouse though, as they apparently had a good tour with some interesting information.  No lighthouses are now manned, of course, they are all automatic but there still have to be repairs and checks.

We had lunch sitting on benches outside the Heritage Centre and then took the costal path to the Lizard. 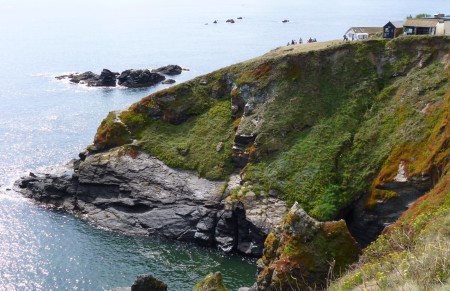 From there we continued along the coastal path towards Kynance Cove. 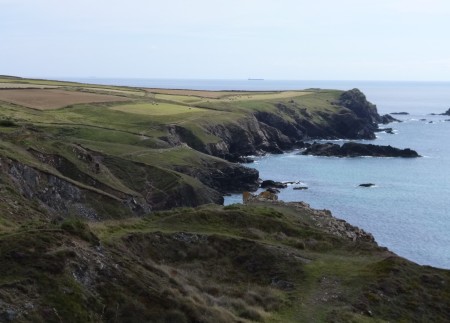 Along the coastal path

We didn’t have time to go down into the cove but looked down on it. 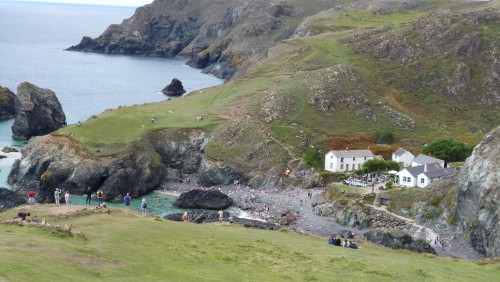 From there we headed back across fields and woods. 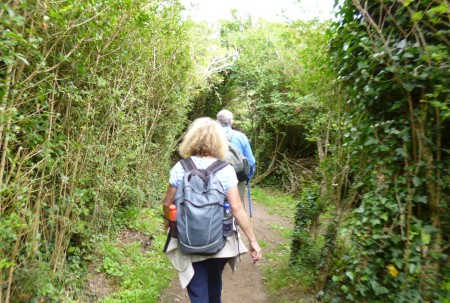 Part of the route was across the top of a Cornish Hedge. 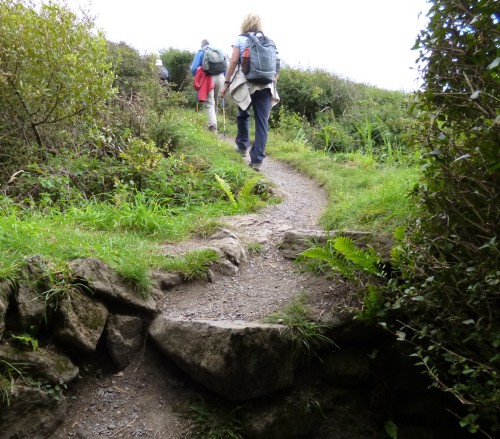 Getting up onto the hedge

The coach driver told us that these are made from two walls of stone with a gap between them.  They gradually get closer together as they go up but are filled with soil and plants grow from them.  Never get your car too close – they might look soft but aren’t! 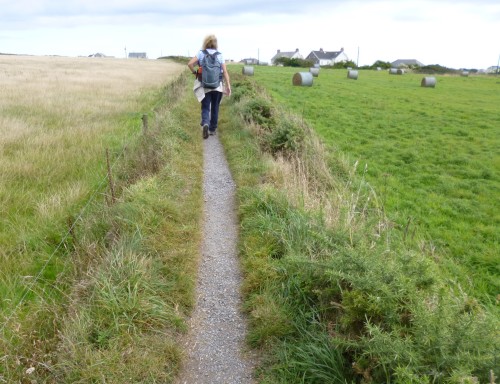 Walking along the top of the “hedge”

We got back to the coach and were told that there was no time for a cup of tea, but in fact by the time the driver was found there could well have been – or at least for an ice-cream!  We took the coach back and had a briefing, dinner etc as usual.

In the night I had some weird dizzy spells and still didn’t feel good the next day, so I opted out.  They were going to St Michael’s Mount and I had been there before and there was coastal path walking – not good with dizzy spells!  I spent the morning resting and sleeping before wandering into St Ives town.

I wandered round the harbour and tried to find the Tourist Information, so I could get a map.

Looking across the harbour

I found the Trewyn Gardens, which had a free bench in the shade so I sat down and had my lunch there. 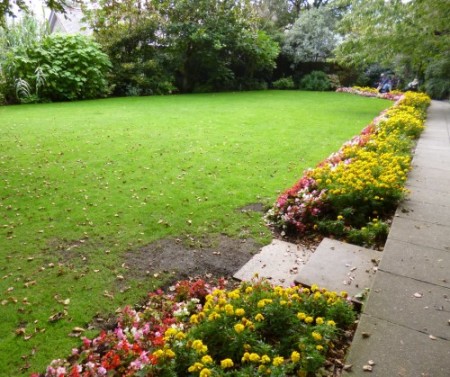 I then eventually found the Tourist Information and bought a map and used it to find my way – back to the sea and then back to the hotel. 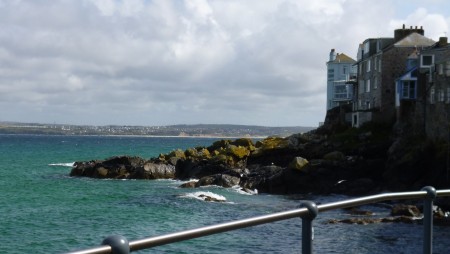 Across the bay from the sea front near the West Pier

I spent more time reading and resting before getting ready for dinner.  The next day was a free day so there was no briefing.

So I was slower getting up the next day and wrote a couple of postcards before going into St Ives.  The tide was out. 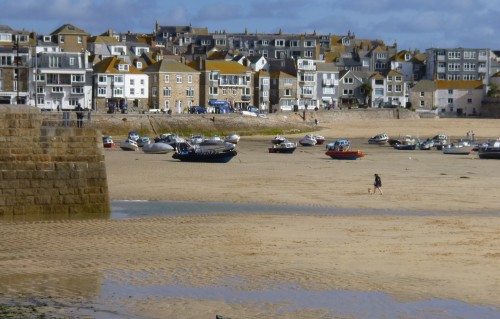 Tide out in the harbour

I walked along Smeaton’s Pier and looked back at the town from there. 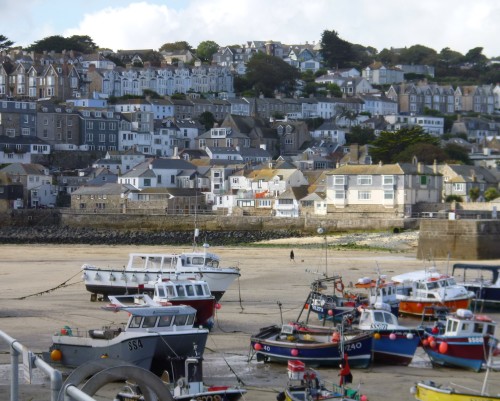 I then went on to the Museum, run by volunteers and arrived as it was opening. 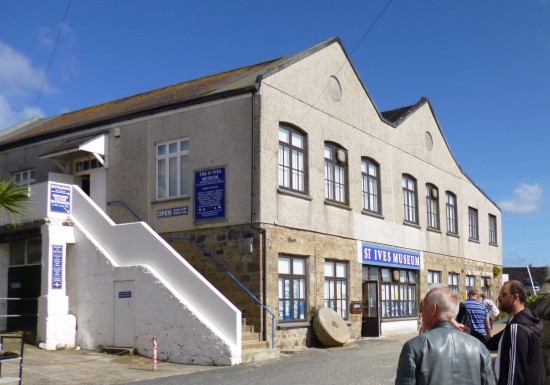 The building has had many uses, including as a pilchard curing cellar, a laundry, a cinema and a British Sailors Society Mission!  Inside it now has a large variety of objects – mostly donated by people in St Ives.  There were photos of St Ives as it had been – fishing, tourists, general life…. There were 2 “rooms” showing how the ordinary people lived contrasted with the more well off;  there was clothing including children’s and also a wedding dress – brown not white.  There were sections for farming, fishing and mining; things from both world wars; information about some of the prominent people and paintings from some of the early artists to come to St Ives.  A glorious jumble – but arranged in sections.  I spent all morning looking round.

I then got more postcards and took them to Trewyn Gardens to write and I also had my lunch there again.  It is a lovely peaceful spot – and seagull free!  I then posted the cards and went to walk round “The Island” – a green hill on a promontory beyond the town. 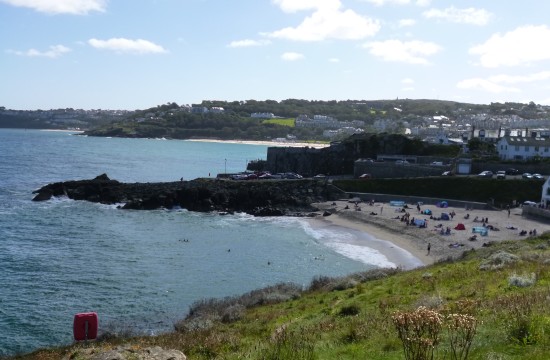 Looking back to Porthgwidden Beach and the town from The Island

There is a Coastguard Watch station there, which had been closed and is now manned totally by volunteers. 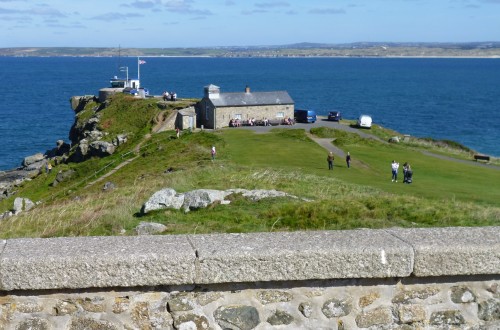 Walking round I saw various seals but this was the only one I managed to get on a photograph – no, not impressive! 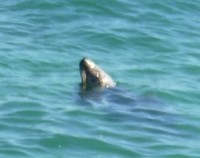 It doesn’t take very long to walk round the Island, but it is a pleasant walk.  Once round the other side one can see Porthmeor Beach, which is the one the surfers use – but the waves weren’t really big enough that day. 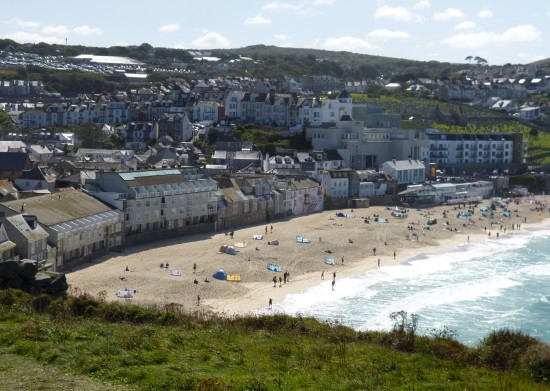 At the top of The Island is St Nicholas Chapel, so I climbed up to have a look – the sailors chapel.  So said a short prayer for those who go to sea. 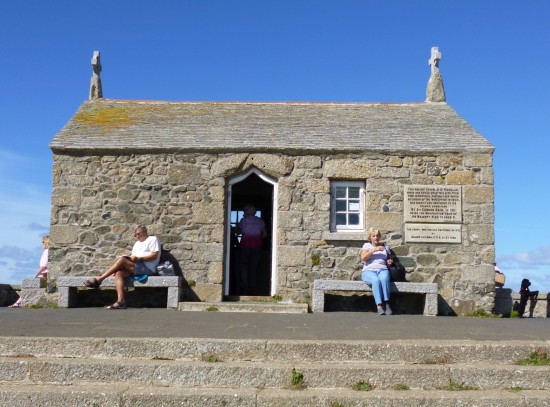 I still had plenty of time after that so I decided to go to the Barbara Hepworth Museum.   There were some very strokable pieces inside – that one was not allowed to touch!  The information about her life was interesting as was seeing her studio but I didn’t like much of the sculpture.  The pieces that fitted into the garden well were OK. 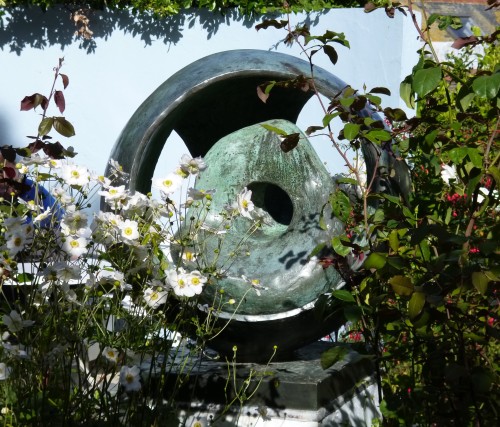 And I quite liked this one….. 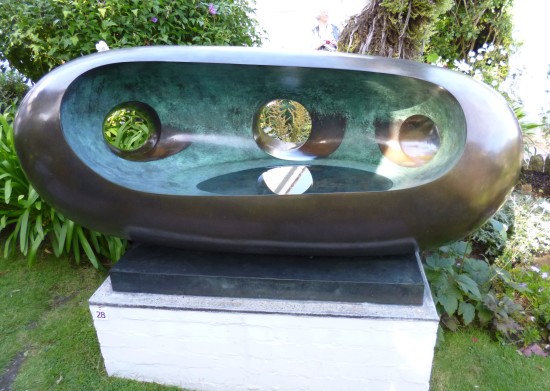 ……because of the way the light shone onto the puddle of water – and the garden was quite nice too. 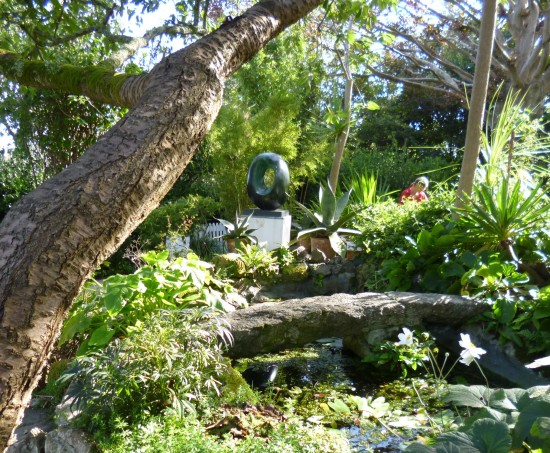 Garden (with another sculpture)

On the whole I don’t think I appreciate modern art – or perhaps I just don’t understand it?

It was then time to go back to the hotel ready for the briefing and dinner.

(See part II for the rest of the holiday!)