We go on to the seventh week of lockdown…….

I discovered that Arthur 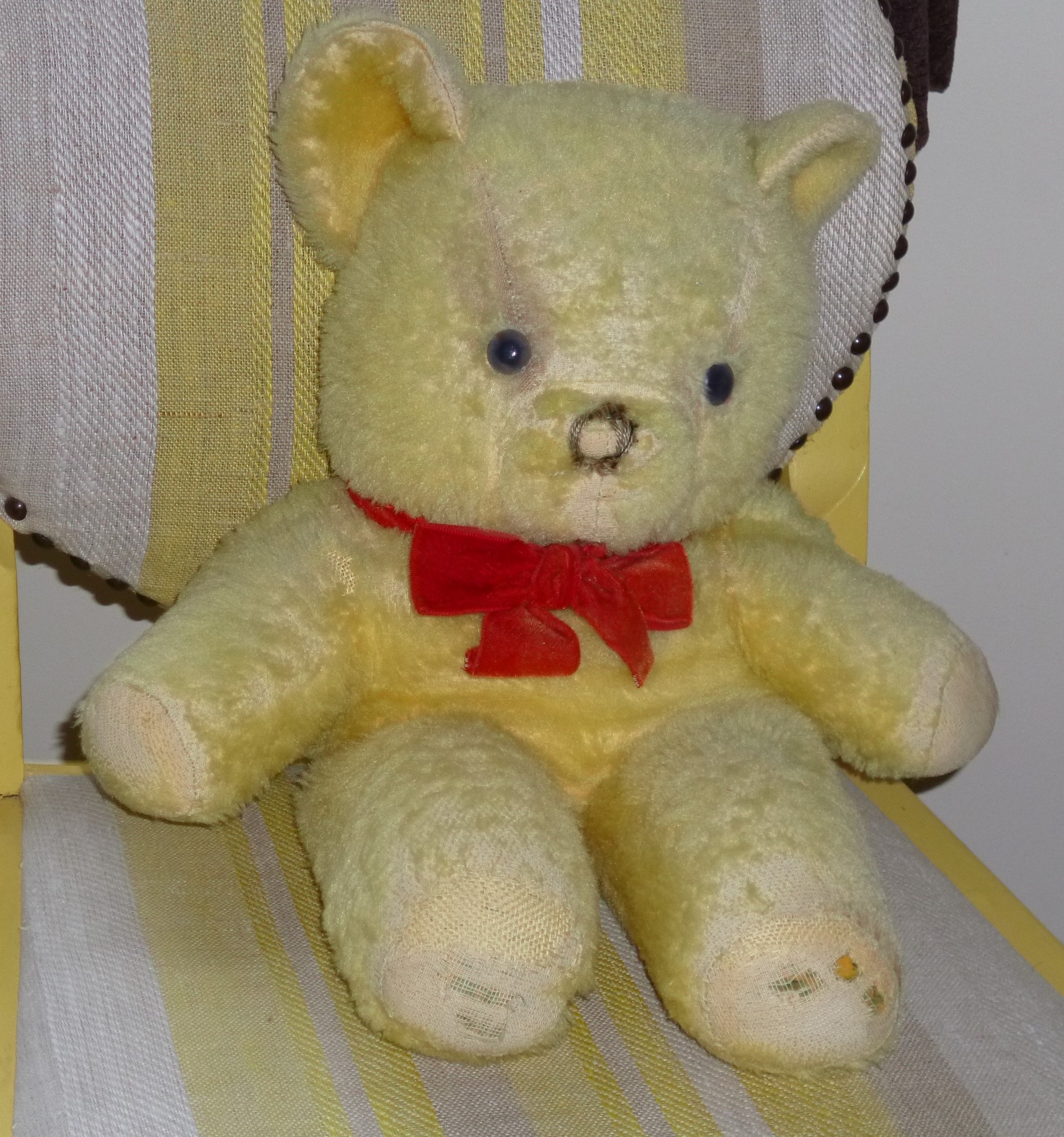 was leaking – I have had him nearly 50 years and he wasn’t new when I was given him, so maybe not surprising! I decided I would have to do something about it and thought I would darn the holes

until I looked harder and found that, having darned him before I would be darning a darn to a darn! I decided it would have to be a patch. Then I had to choose what material to use.

Thought probably not green or blue but I did consider red, to match his bow but thought yellow was probably better. There was still a choice and I did seriously consider the yellow flowers, but maybe that was a bit too feminine? Went for a plain yellow in the end.

So here is Arthur with 3 new paws (the other one was ok and even had fur on!) and a new nose and mouth. No black wool so his new nose and mouth are a dark navy but that seems to work. He isn’t very clean though…..

Monday was Book Group, the book being “A Town Like Alice” by Nevil Shute. 3 of us had read it: 2 for the first time and me for the third (at least). The others had read it a while ago and didn’t re-read it as they had other things to concentrate on!! I think we all enjoyed it and thought it was a good story – maybe not the most literary, but enjoyable, despite the fairly traumatic part in Malaya. We have decided that until we can actually meet we will not have a set book but share things we have enjoyed reading.

So what else this week? Usual really – lots of phone calls (6 on Friday – 2 out and 4 in!); shopping; bit of gardening; not much progress with jigsaw; finished eating Easter egg; continued with “Working Lives in the Factories and Mills” – on children in the mills this week. They started too young, had to work long hours (14 a day at one stage), were likely to have serious accidents and generally life was not good. Continued the book I started last week – it is 800 pages long (plus 80 pages of historical facts) and I am not yet half way through the novel part. Good book for lockdown!

Also did some walks and at the end of the week it was interesting to see what, if any, decorations there were for VE day. Our street didn’t seem to have many/any, but a neighbouring street had really gone to town. I suspect they had a street party – “socially distanced”, of course! Did I do anything? No – somehow the fact that it was the 75th Anniversary had passed me by until the day before, so hadn’t realised I should/could have done something…..

Other people? I know my brother has been having lunch “with” an ex-colleague once a week, as they always did before this, but now in their own homes and by whatever video conferencing thing they use, but I heard of a big family who had a birthday (70th?) lunch by Zoom. They didn’t all eat at the same time, but they did link up – best one can do at the moment.

Another friend of mine is really into making soups – partly because the veg boxes she is being given seem to have an excess of something every week. It was carrots one week, potatoes this week and cucumbers another week. Some cucumber went in a soup and another in a vegetable curry. I would never have thought of cooking cucumber!

And so we will go on to the excitements of week 8……. Totally unclear as to what position we are in. The Prime Minister’s broadcast last night was very unclear – are we still in lockdown or not? Should I be staying at home? And most important are the garden centres open or do I have to travel to Wales for that?!!