On the Monday, when some people went home and others arrived, those of us who were staying had a free day.  After writing my postcards I went into Storrington to buy stamps and post them.  As it was pouring with rain and I still had some time on the parking ticket, I also found a cafe/bakery and had a coffee.  By the time I had finished the rain was a bit less, so I set off for my intended target – Bignor Roman Villa.  This was reasonably easy to find but the last part was along a lot of narrow and winding roads – with a fallen bush partly blocking one of them!  I did manage to get passed that and arrive in the rather muddy car park.

The building was under the care of a young lad – although there did seem to be one or two others – almost equally young, I discovered later.  He sold me a ticket and directed me in the right route to take.

There was a model of how the villa had (probably) been; it was very big by the end of its life, with a large enclosed courtyard and buildings on 4 sides with a gateway.  Most of this is now back as farmland but the original bit has been enclosed and is in a building – which I was in!  There was a display of some of the pottery and other finds and I found it very interesting to look at the difference between the fine ware and the course ware.  This was something I had read about during two of my online courses and looked at the pictures, but seeing the real stuff made the differences come alive and was very interesting.

I then moved on through the rooms, which had their mosaic floors.  We were walking on the edges, where there were no pictures, but still where the original owners would have walked. Wow!

Can’t remember what the pictures were supposed to represent – they did have signs to say, so I didn’t get a guide book.  You can see the sign on the picture above, but I can’t read what it says! 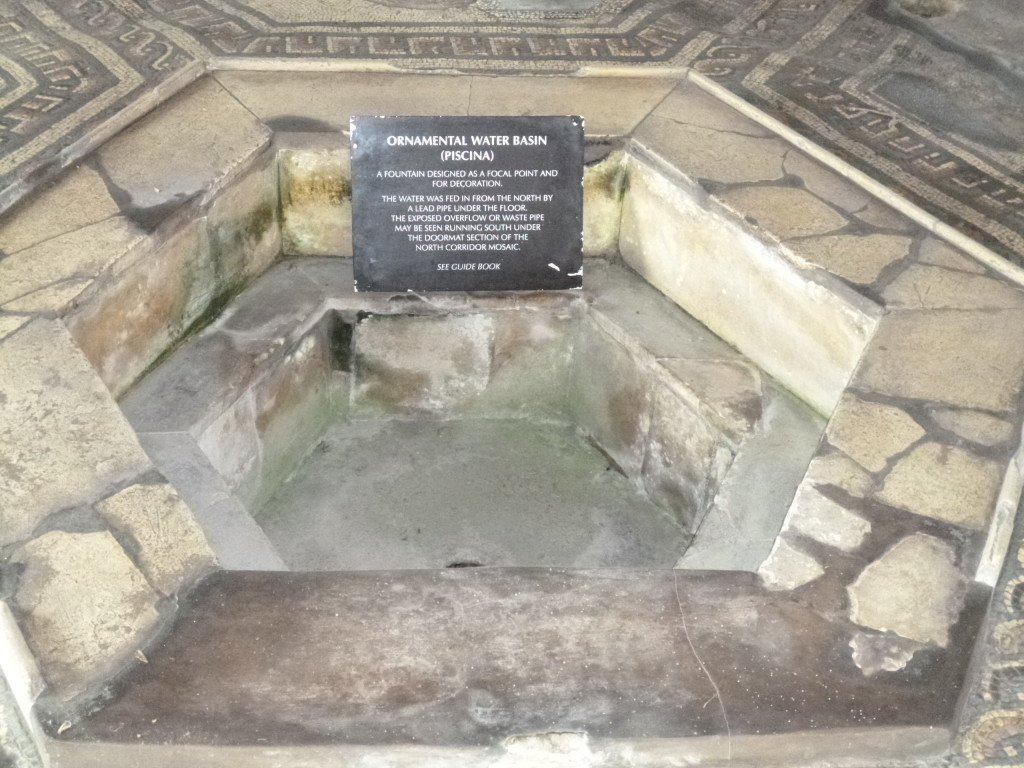 This one was not a mosaic, but one can just about read the sign (well, the main title).

I liked the men across the bottom of this – I think they were warriors or maybe gladiators?

This is just a bit more detail from the top of the previous one.  The blue on the birds was apparently blue glass.

After looking round the main building, including seeing some of the original lead pipe-work and parts of the underfloor  heating system, I saw a coach full of children arrive.  (Glad I didn’t meet the coach on the approach roads!)  I therefore decided it was time to have lunch and as it had stopped raining, went and sat outside on the picnic tables provided.  I then saw that there was another enclosed building and after lunch went to have a look – it was part of the bath house.

I then went to the cafe area of the building and the lad made me a pot of tea and I chatted to the coach driver and another couple who were there.

It was then time to make my way back to Abingworth Hall so I could join with the new arrivals for tea and cake.

After dinner, there was a “village fete” type activity.  We either were in teams or were put in a team as we arrived and then we played games like roll-a-penny (the old pennies!), how many pegs can you collect from the line before you drop one, hoopla, bouncing a ping-pong ball into plastic cups etc.  We got a score for each and these were added up – our team apparently didn’t win, but we weren’t last either.

So was it a good day?  Yes – I really enjoyed the villa and looking round at my own pace and relating it to the on-line courses I had done.  The evening activity was fun, too.