There were different places to visit in the second half of my hf holiday in St Ives.

The next day, Wednesday, we went by coach to the Geevor Tin Mine.  On getting there we were able to leave our bags in a room and then had to pay and get our hard hats. 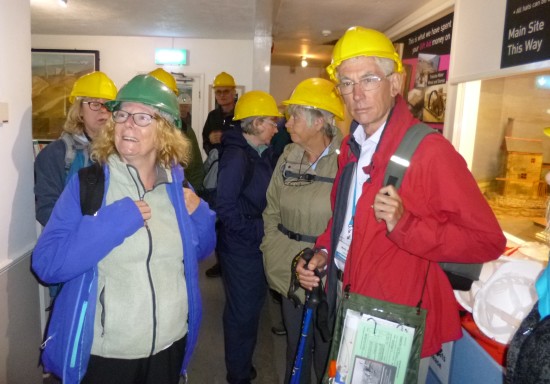 We had a guide and were first shown a 3-D model of all the tin mines in the area with wires showing where the mine tunnels were.  Some were very long and went out a long way under the sea.  It was amazing how many there were and the different depths.

We then went outside and passed the winding wheel for “Victory Shaft”. 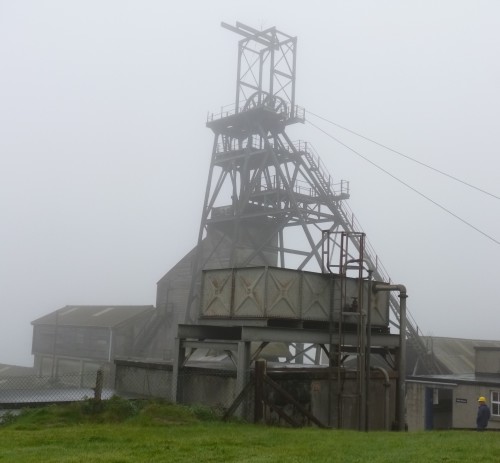 From there we had a quick look at the Hard Rock Museum – showing various different samples – and then went on to “The Dry”, which is where the miners would have clocked on, been assigned their position for the day and changed into their mining gear. 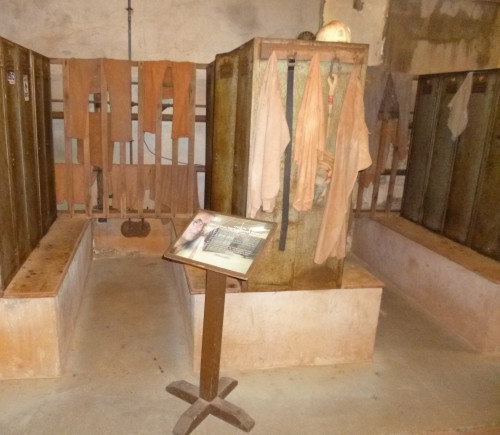 From the dry we went on to The Mill where some of the processes for extracting the tin were explained and demonstrated.  We were then shown where we could get overalls to cover our clothing to go down into the mine.  The leader and I got about 10 yards in and as the guide stopped to give more explanations we both decided we were not going to cope with going in any further – so went back.  Everyone else went on – they were welcome!  I went and had more time to look at the boards in The Dry and to look at the rescue room and the first aid room.

When everyone had eventually gathered together and we had returned our hard hats and collected our bags we were shown an area where we could eat our lunches, as it was a bit damp outside.  It was the hut school children use for the same reason.

After lunch we walked along the coast path – didn’t look quite right at times – passing other tin mines on the way. 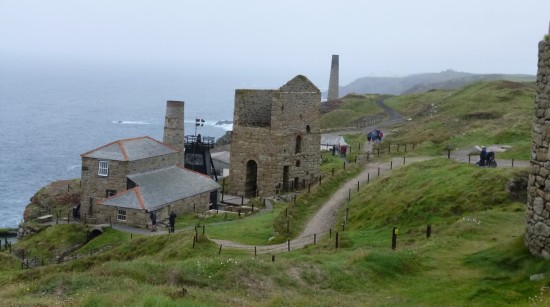 The Levant mine – I think

When we got to Botallack we got the coach again to Lands End. 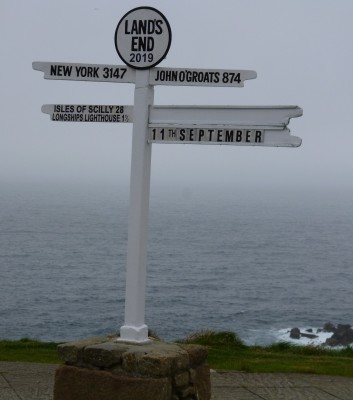 Proof we were there!

From Land’s End we walked along the coastal path. 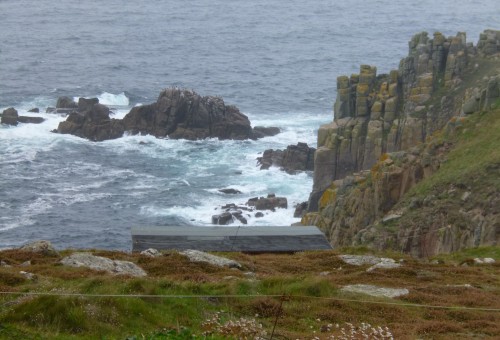 From the coastal path

As the path is well used in this area it has been reinforced with stone slabs in some places. 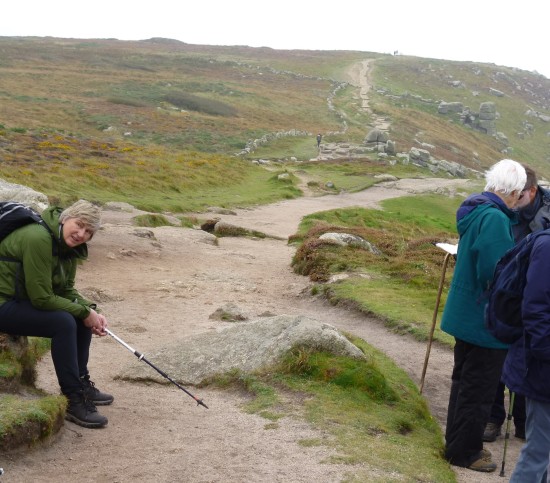 One of the rocks we passed was “the Irish lady” – which has some legend that I don’t remember now! 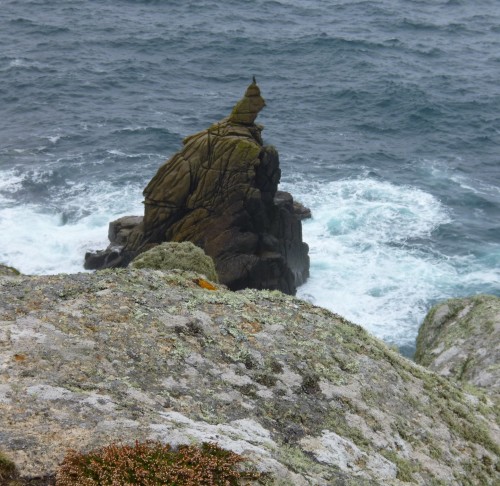 We walked to Sennen Cove where the beach would have been nice if it hadn’t been damp and misty.  The café was closed too. so we went and got a cup of tea at the pub before the coach collected us to go back to the hotel for briefing and dinner.

The next day the coach took us for a fairly quick look at “The Merry Maidens” – another legend attached which I can’t remember!

We then got back in the coach to the village of Treen where we got out and started a lovely walk through fields and woodland. 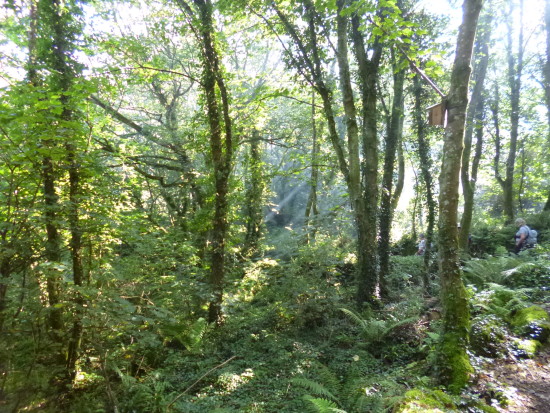 Sunlight on smoke in the woods

We were on National Trust land and came across some volunteers who were creating an orchard and had a bonfire – hence the smoke to show where the sunbeams were.  Our path led us to the village of Penberth which was small and attractive (and had a loo!) 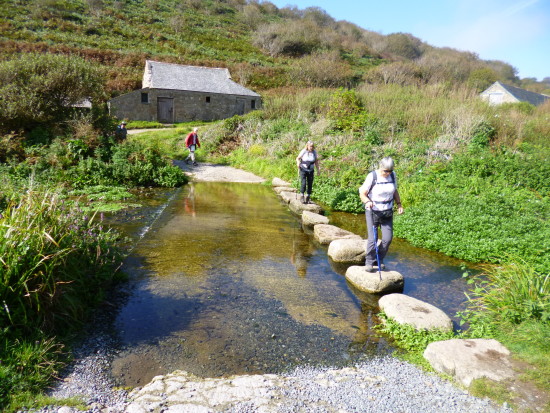 The stepping stones were not the only way across the stream – but more fun – until I nearly fell in on the way back across them! 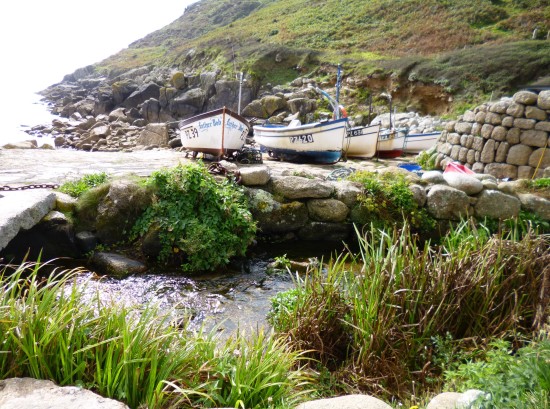 From there we went along the coastal path – quite a steep climb out of the village. 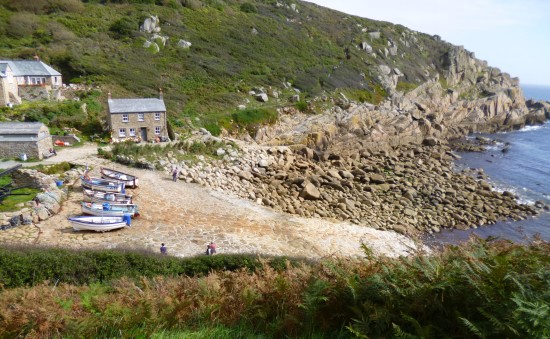 Looking back on Penberth from the coastal path

We continued along the coastal path to an Iron Age Cliff Castle. 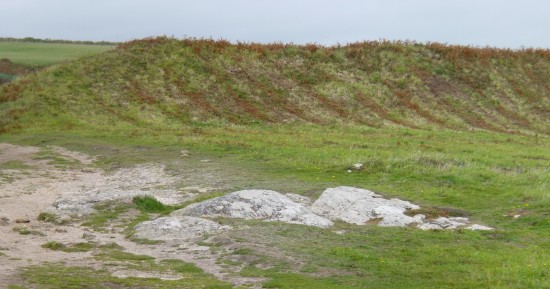 From there we could get a good look at Logan Rock, which used to rock and the locals earned money by showing this to tourists.  However some 17th? 18th? century lieutenant got his seamen to knock it down.  He was made to pay to get it put back – but it no longer rocked.  I think that was the story. 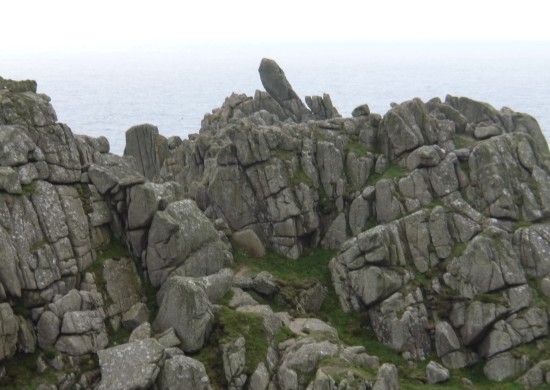 We continued on towards Porthcurno and could see the Minack Theatre on the opposite cliff. 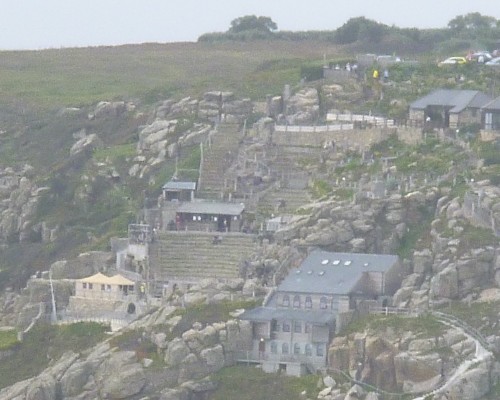 We also had a view of Porthcurno beach. 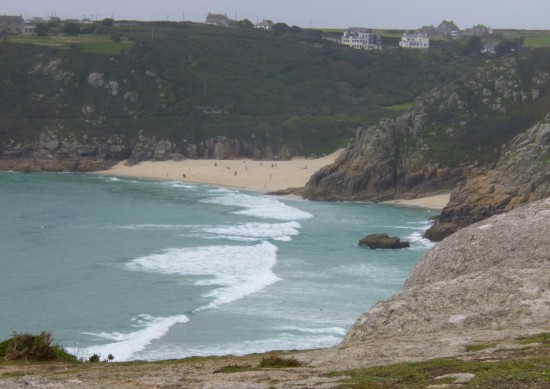 We continued towards Porthcurno and passed this monument. 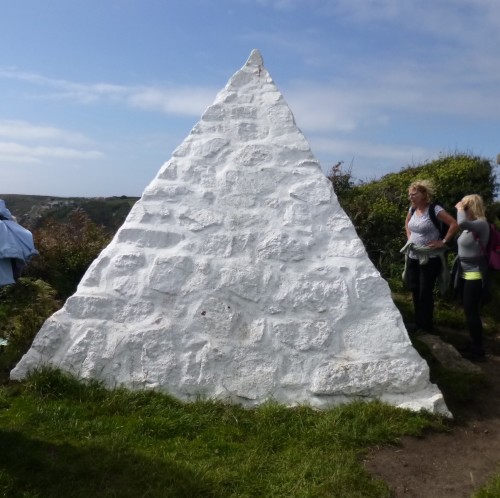 The plaque on it explains that it marks where the first Transatlantic telegraph cable link came ashore. 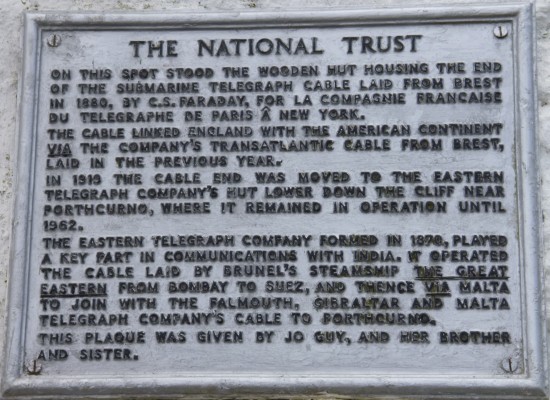 We went on and had lunch on Porthcurno beach.  Some of us (yes, me included) had a paddle as the weather was so nice. 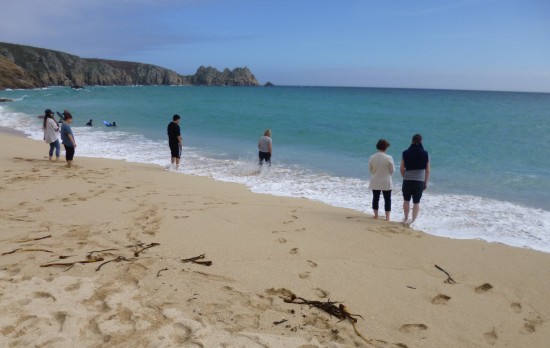 We then headed up towards the Telegraph Museum passing the Cable House on the way. 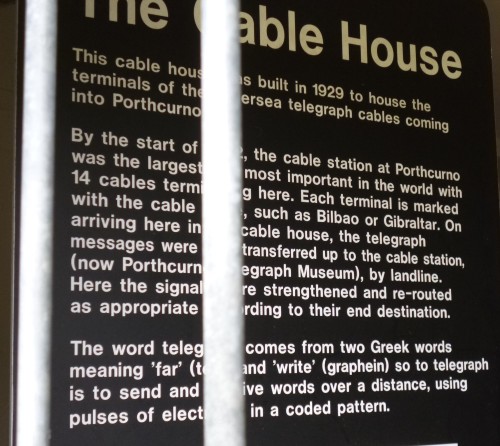 This had all the cables coming in from around the world. 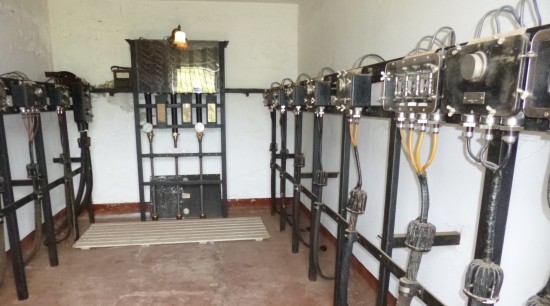 Walking up further we could see some of the remaining wiring. 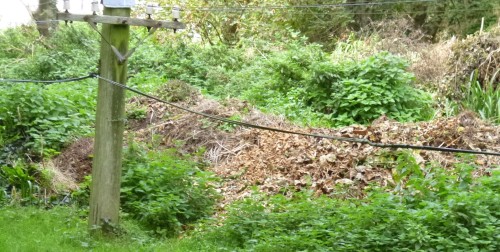 When we got to the Museum several people just had cups of tea but I looked round and found it interesting – lots of physics (!) and also explanations of how the men were trained to be sent out to telegraph stations around the world.  They had to learn Morse code and be able to use it to send and receive very fast and without errors, but also I think some basic electronics in case of problems.  They did have some time to play cricket!

After the Museum – not enough time to look at it all – we got the coach to Mousehole where we had time to look round and I also had time for a pot of tea. 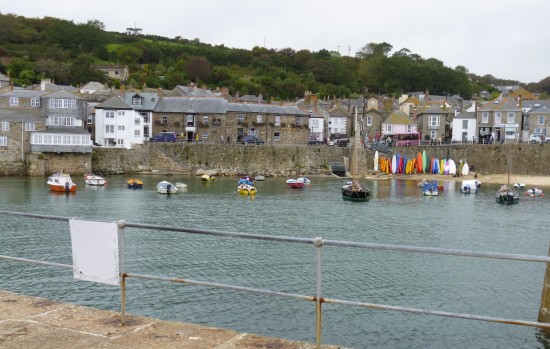 It was then time to get the coach and return to the hotel for the usual briefing and dinner.

On the final day we had to leave a bit earlier to catch the train to Lelant.  We started by having a look at St Uny Church in Lelant. 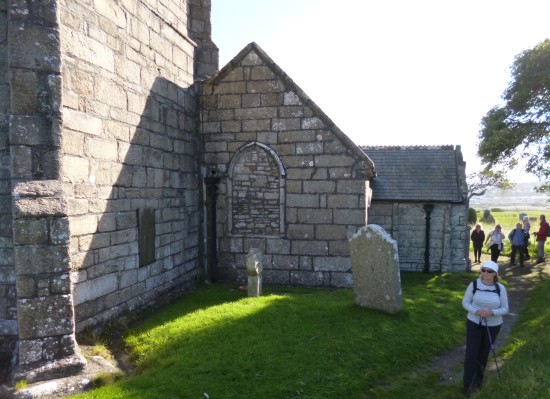 From there we walked along the coastal path back towards St Ives. 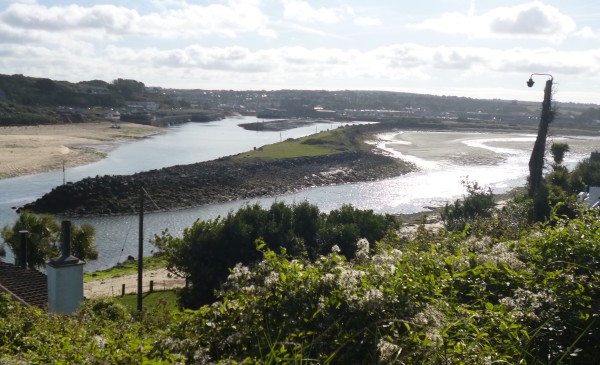 From the coastal path

We crossed the railway line a couple of times and stopped for a (very expensive) cup of coffee at Carbis Bay. 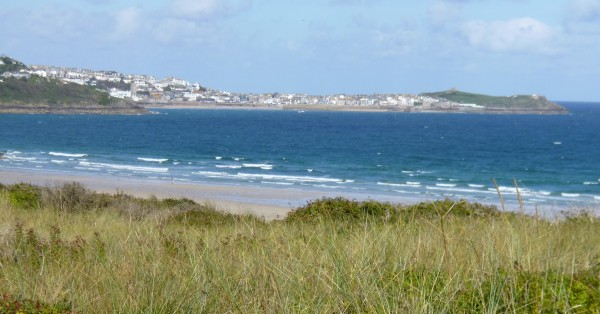 We got back to St Ives by lunch time and then had (more) time to look round St Ives.  I had lunch in Trewyn Gardens again, but all the free benches were in the sun so I didn’t linger as it was a hot day.  I walked round The Island again and sat in the shade near Smeaton’s Pier for a bit where I spent some time watching a bird pick up crumbs. 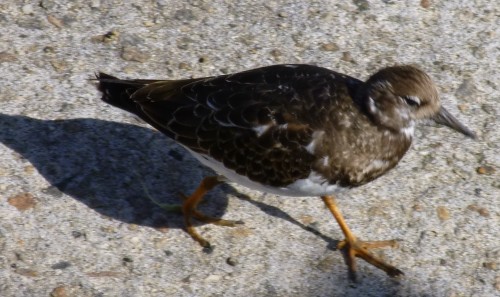 There really wasn’t anything I wanted to do in St Ives except have an ice-cream – which I did.  Then as I was heading back to the hotel I saw them launching the lifeboat.  It has to be taken out into the water on a trolley which is pushed by a tractor thing.

Taking the lifeboat ount into the deep enough water

When it was deep enough they somehow released it so the boat was launched. 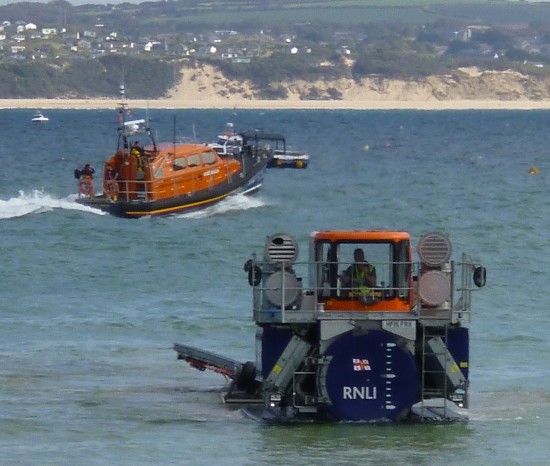 The lifeboat didn’t seem to actually do anything much after that – just sailed round the bay, including where we had been in the morning.  It was then time to go back to the hotel and to pack and prepare for dinner before leaving the next day.

So was it a good holiday?  Not exactly the best ever.  Too many cliff edges, high places and mines underground and we seemed to have too much time in St Ives and at not very interesting places and not long enough at the places I liked!  This is probably because I like different things to many people.  The weather was mostly good and not too hot either, but we did have one woman who seemed to talk all the time and was unrelentingly positive – very wearing!  Add to that the initial train cancellation and the day I was not so well and it all added up to a holiday that was ok but not brilliant.  The Penberth and Porthcurno day was by far the best!